The World from a Barley Seed

From the Desk of Alan Butler Writer, Researcher and Broadcaster

Want to learn something truly amazing? Then read on. This is a story that is just dying to be told and it proves how sometimes even supposed experts can get things totally wrong.
We owe a great deal to the Sumerians. This culture, which flourished in what today is Iraq, goes back to well before 3,000 BC. The Sumerians gave us writing and created the method of time keeping we still use today. In addition they invented the wheel, influenced agriculture, built the first city states and left behind a wealth of invaluable evidence.
Very early in their history the Sumerians began to live a settled life, based on farming. This led to great settlements, where specialists could flourish and where trade was an essential part of life. Society works best when everyone involved is singing from the same hymn sheet, especially when it comes to buying and selling in the market place. For this reason the Sumerians soon developed a good way of dealing with measurements of all kinds. As history progressed, and the Sumerian civilization eventually gave way to that of the Babylonians, the Sumerian measuring systems became fiercely complicated and were often different from city to city. But that’s not the way things started because if we peel back the layers of history we can see that, quite early in its history, the Sumerian measuring system was simple, consistent and covered everything necessary for a settled life.
Any measuring system that is really good is integrated. That means that various aspects of it relate to all the others. In the metric system for example, there is a basic unit of length, the metre, and all the other measurements derive from this. A cube with sides 1/10th of a metre in length holds a specific amount of water. In terms of volume, this is called a litre, and the weight of the water is called a kilogram. Things never alter and everyone knows where they are. However, the metric system was only created at the end of the 18th century, and is based on the size of the Earth, whereas the Sumerian system is truly ancient, so of course it must be much more primitive than the metric system – or is it?


Measuring Length
Like in the metric system the Sumerians started out with a basic unit of length. This was called the kush. We know how long the kush was because one of the Sumerian kings, Gudea, left us statues of himself, on which a kush measure is recreated. Since there is more than one statue, and the lengths agree, we can take it that the measures were carefully made – so carefully in fact that we can easily see that the kush was 49.94 cm in length. It’s important to realise from the start that the Sumerians dealt just as often in ‘double’ units, as they did in single ones, so the double kush, at 99.88 cm was just as important as the single kush. In fact, as we will see, it is very likely that the double kush actually was the true unit of length first used by the Sumerians. 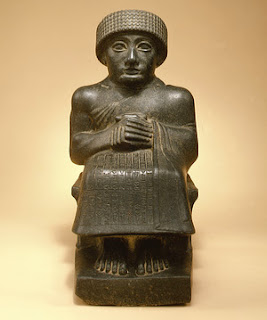 
The Sumerian’s basic unit of volume was called the Sila. This too appeared in half and double forms. But this is where the controversy starts. It is quite obvious to anyone with half a brain that the Sila was derived by way of a cube, with sides of 1/10th of a double kush – just the same way the litre is derived from the metre. Experts do not agree, and have come up with all sorts of tortured explanations as to what the Sila really is. I’ve described their arguments as being akin to the person who said the plays of Shakespeare were not written by William Shakespeare at all, but by another man of the same name!
Examples of Sila vessels show that the volume of the Sila was equivalent to around 0.996 litres.
Measuring Weight
The Sumerian unit of weight was called a Mina. No matter what the experts say, it is equivalent to the weight of water in ½ a Sila, which turns out to be 0.498 kilograms. Once again, the double Mina was often used, which would have weighed 0.996 kilograms.
And there we have it – a simple and efficient way to measure anything. There were subdivisions and multiples for all these units and they used the base 60 counting system that the Sumerians invented. But that certainly isn’t the end of the story, because in order to have an efficient measuring system, it’s important to be able to verify it whenever is necessary, otherwise people will start to cheat and give short weight or length. The way this was achieved in comparatively recent times was to produce ‘sample’ measures, that were incredibly carefully made, and which could be used to verify the weights and measures being used in the market place. Sumer was a mainly Bronze Age culture, so they did have metal and could have made sample measures, but how did they arrive at their units in the first place? This is where the experts really get their knickers in a knot because although they have all read what the Sumerians say on the matter – they don’t believe it. Why they think the Sumerians are lying is a complete mystery to me.


Arriving at the Measurements
Clay tablets left to us by the Sumerians are quite specific. They say that the unit of length, the kush, was equal to 180 barley seeds. “Oh no,” say the experts. “That can’t be correct.” I’ve searched everywhere to find out why these people don’t believe the Sumerian scribes and I can only assume that they have been looking at our own experiences in the West. In Europe, both barley seeds and wheat seeds were once used as basic units of measure. However, quite quickly these became simply standards. In other words, the weights and measures eventually had nothing whatsoever to do with seeds any more, and they altered considerably in size. Those who have studied the Sumerian culture assume that the same was true, and that to the Sumerians the term ‘barley seed’ actually meant something artificial and had nothing to do with the plant at all.
If any of the modern experts actually tried to make a kush out of barley seeds, they probably laid the seeds end to end, as the Europeans originally did. If so, there’s no wonder they thought the Sumerians were not talking about real barley seeds. What they obviously never tried to do was to lay the seeds on their sides, front to back. If they had done this, they would have discovered that even 180 modern barley seeds does indeed measure an incredibly accurate 49.94 cm and the 360 barley seeds of the double kush is a reliable 99.88 cm. (Of course this varies slightly from experiment to experiment but 99.88 cm is a reliable average and each experiment is incredibly similar.)

A barley cubit or kush, comprised of 180 barley seeds.


Volume, Weight and Barley Seeds.
So far so good and. I can say, hand on heart, that the experts who state the Sumerians did not use real barley seeds to set their unit of length are downright wrong. If they doubt what I am saying, they should try it for themselves, or they could simply look at the picture above..
But the Sumerians did not stop with length. They quite clearly said in their clay tablets that the weight of the mina was equal to the weight of 10,800 barley grains. We’ve already established that the double mina, if created from a cube with sides 1/10th of a kush in length, would hold a weight of water equivalent to 0.996 kilograms. There would be twice as many barley seeds in this case, bringing us to 21,600 barley seeds. That means each barley seed should weigh 0.046 grams. The experts obviously chose not to get out a pair of scales and check this, but we did. We used organic barley, supplied to us by a friendly farmer and we discovered that, on average, our barley seeds weighed 0.0465 grams. We also looked up other figures and discovered that the average weight of barley seeds from the 1979 British crop was 0.045 grams.
There is nothing ambiguous about this. Between our own barley seeds and those from the 1979 crop, the average weight of a barley seed was 0.04575 grams – as near to 0.046 grams as makes no difference, especially bearing in mind that the Sumerians were growing their barley 5,000 years ago.


So Far, So Good
It all works out perfectly well. We can take it as read that the Sumerians based their whole system of weights and measures on the size and weight of barley seeds. It doesn’t matter what the experts say to the contrary because the system works. Anything they choose to do to muddy the water is a total waste of time and is irrelevant.
So why won’t they accept that this is what the Sumerians did? Well I suspect it’s all a matter of embarrassment. The trouble is that the universal measuring system used in the world today is the metric system. It was devised by the scientists of the French Academy of Sciences in the heady days of Revolution in France at the end of the 18th century. They based the system on the polar circumference of the Earth. Establishing a measurement between the North Pole and the Equator, they split this length into 10,000,000 units, each of which they called a metre. They said that 1,000 metres would equal a kilometre, and because they then had to multiply by 4, it turned out that the Earth had a polar circumference of 40,000 kilometres.
As I’ve already pointed out, they devised the units of weight and volume from a cube with sides of 1/10th of a metre. (actually they used the centimetre but it amounts to the same thing). All that mattered was that the system worked, could be universal and could always be re-checked.


The Implications
I hardly dare to consider the implications of all this. I have altered no numbers and everything here in terms of length is based on a kush of 49.94 cm, which is what the measures on the Gudea statues tell us it was, which is confirmed by the barley seed experiments. As far as weight is concerned, I have followed what the Sumerians said they did, and measured barley seeds to verify the results. Since the weights turned out correct and mesh with what the Sumerians stated, how can be doubt the evidence of our own eyes?
So was the Sumerian weight (mass) measurement based ultimately on the mass of the Earth? If it was, they were very, very bright and got extremely lucky with regard to the weight of a barley seed. On the other hand, we know very little about the evolution of domesticated barley, which could have been genetically engineered or selectively bred to offer the right results.
Whatever the answer this all goes to prove that we can’t always listen to the experts. So often particular scientific endeavours turn into something akin to a religion, which have far more to do with ‘belief’ then they do with empirical research.
You can join me on:
www.cityofthegoddess.com
www.washingtondcschamberofsecrets.com
Posted by Alan Butler at 04:09 7 comments: